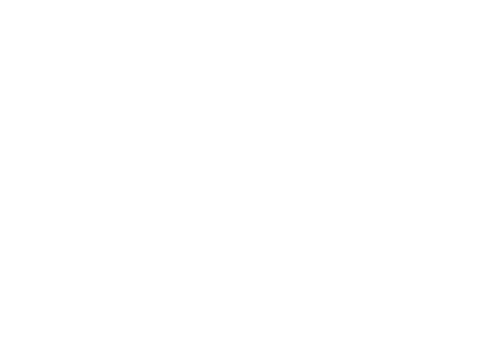 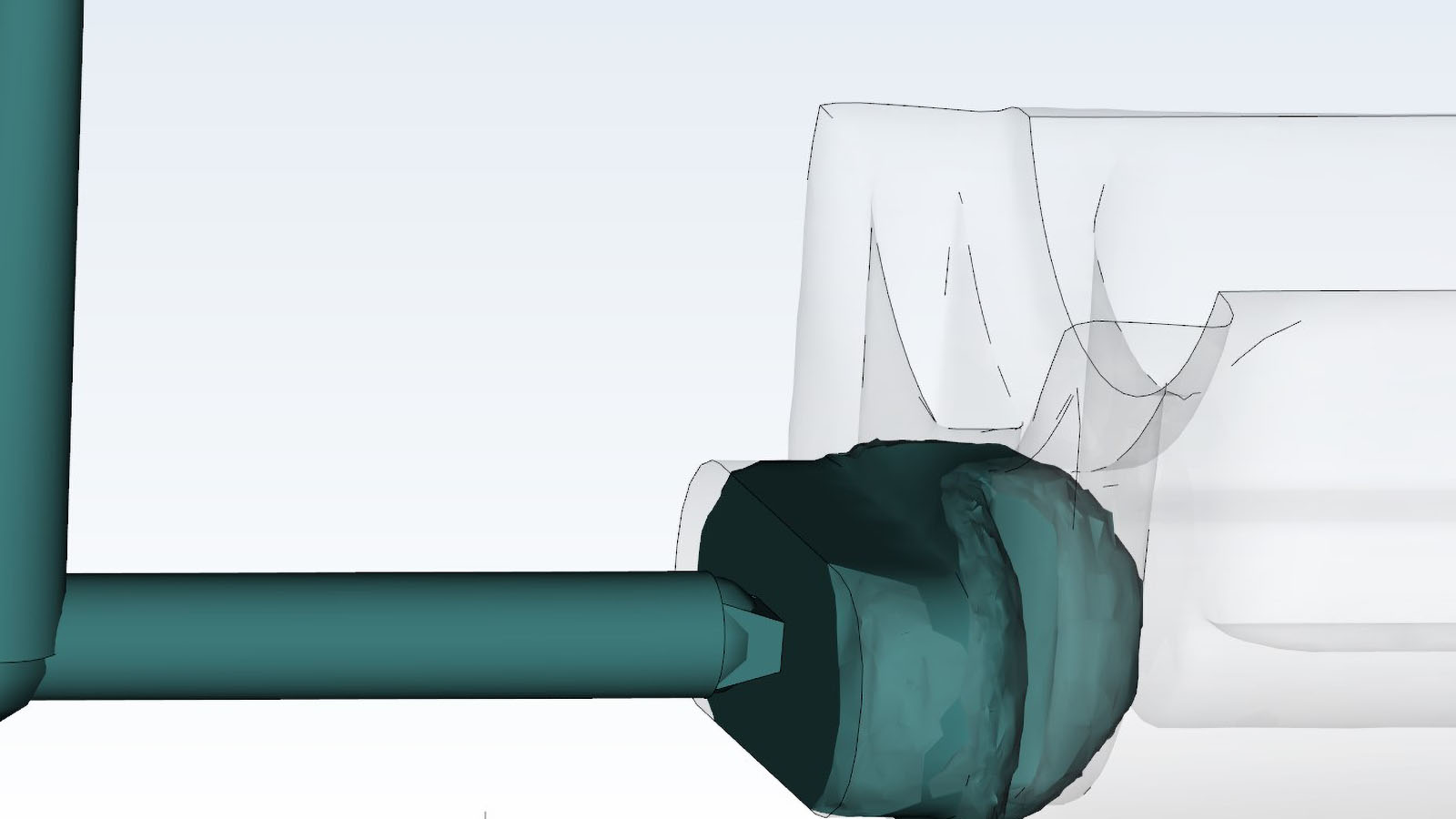 Types of Gating for Injection Molding

A critical component in mold design is choosing the correct gate. The function of the gate is a simple concept, but choosing the wrong type of gating can cause several problems during processing. In this post, we’re going to discuss several different kinds of gate designs and how they’re used.

When choosing the gate type/location for a molded part, there are a few important factors to consider. The first is how the mold will be designed and where a gate can be located. Part orientation in the mold, show surface location, and action locations can limit the options for gating. Further design considerations are material selection, part volume/size and production functionality.

Some plastics are more sensitive to over-heating conditions. This is known as shear heating. Any time plastic is forced through a restricted area, there’s some amount of shear heating. Attempting to fill a large plastic part with a small gate will create excessive shear heating and could degrade the plastic. With that in mind, gate designs like submarine gates have limitations to the maximum size of the gate, which may eliminate the gate design as a possibility for larger parts. Furthermore, the gate could freeze off before the part is full.

Gate freeze is an important aspect of the injection molding process. Generally speaking, gates need to be large enough to fill out the cavity properly but small enough to “seal” the cavity (gate freeze). Gate freeze should occur when the cavity is completely packed out and ready to start the cooling process. Since the gate is small, it should cool off relatively quickly compared to the molded part or the feed system. Gate freeze allows the part to become isolated from the feed system and for the injection molding machine to move onto the cooling/charging phase of the molding process.

The function of the mold in the production environment is another consideration. A defining characteristic of the different kinds of gates is whether they break from the molded part automatically or require trimming. In higher volume applications, it becomes less feasible for an operator to trim gates manually. In this case, either factoring in robotic gate cutting (Nipping) or changing gate designs should be factored in. Scrap costs generated from cold runner systems may justify a hot runner where zero scrap is generated.

Below are the most common gates types in injection molding:

Edge gates are widely used for their simplicity and effectiveness in the injection molding process. They are easy to produce when building a mold and are easily modified if needed. They are also ideal for filling larger parts or parts where thicker wall sections could not be avoided. An edge gate can have a larger cross–sectional area compared to other gates. This allows more plastic flow and the ability to have longer hold times because of the longer gate freeze.

For simplicity, we grouped edge gates with fan gates and tab gates. The image below shows an edge gate where the circular shape of the runner tapers into the rectangular shape of the gate. In the case of the fan gate, the shape would still be rectangular but would be wider than the width of the runner. The widening of the gate into a fan can help with plastic flow, dimensional stability, and may avoid some cosmetic issues.

Tab gates resemble edge gates but are a mostly consistent thickness for a short distance leading into the molded part. These gates are usually used on flat or thin parts to reduce shear stress. Since the first section of high shear created by the thin wall section is in the gate, the shear stress is more likely to be contained in the gate. The high shear area is then trimmed off after molding.

The limitation of edge gates is the maximum cross-sectional area. Having too large of a tunnel gate can cause cracking or undesirable cosmetic issues due to the automatic shearing. Due to the size limitation attempting to fill a large part with a small gate may also cause excessive shear heating and fill problems.

Much like a tunnel gate, the cashew gate is machined below the parting line and is automatically sheared during ejection. This style of gate is used to get the injection location behind or below a show surface. Cashew gates often have the same limitations as tunnel gates in terms of size.

The challenge with cashew gates is that removing the gate during ejection requires the plastic to pull out around an arc. Because of this, there’s a chance the gate may break off. Removable gate inserts are typically added so that an operator can quickly remove the broken plastic without major intervention.

The image below shows a part we molded at Basilius with a diaphragm gate. Typically this style of gate is used on open-ended cylindrical parts. In this case, design limitations and the desire to have even fill made the diaphragm gate the best option. The red area in the image is the gate and was sheared off in a secondary operation.

The thermal gate functions much like a normal gate where the material is injected into a cavity and material pressure is held until enough cooling occurs. The advantage here is not having the runner system leading up to the gate. Material is saved and slightly better process control is established. This gate design can leave gate vestige because the gate area is broken away from the hot runner tip during mold opening.

The valve gated hot runner system provides the same advantages of the hot runner thermal gate but adds another level of control. In this design, there is a movable pin inside the hot runner tip assembly. When back (left side of the image below), molten plastic can flow into the cavity. When forward (right side of the image below), plastic flow is shut off. This provides the ultimate control of a runner feed system, larger gate sizes, and less gate vestige. 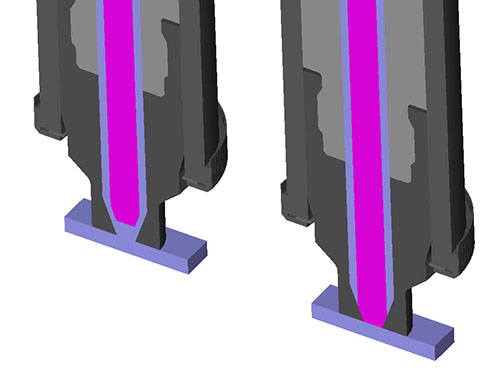 Gate design is a critical component of the injection molding design process. Accessing the variables like part/mold design, material selection, and production intentions are important considerations when deciding what gate design is right for the job. We’ve built hundreds of molds over the years at Basilius, with each one using one of these designs or even variations of them. We hope this serves as a core understanding or gating and what options are available. 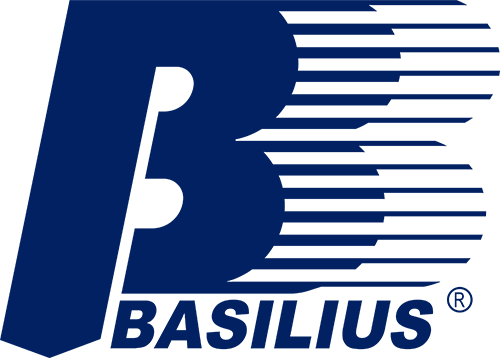